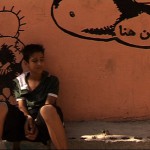 7 Stones is a docudrama produced in collaboration with children from the Dheisheh refugee camp in the West Bank. It tells the story of Jamal, 12, whose brother was imprisoned for throwing stones at Israeli soldiers and asks what kind of childhood is possible living under war and occupation?