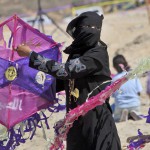 Check out the Guardian’s live blog from Gaza.  In 2011 the Bristol Palestine Film Festival featured two works from Gaza this included a celebration of the Kite Festival in which which 6000 children attempted to break the world record for simultaneous kite flying.

Dates will be announced for the 2012 festival in the near future where we hope to feature more films, art and culture from Gaza and Palestine.  Please stay tuned for updates.